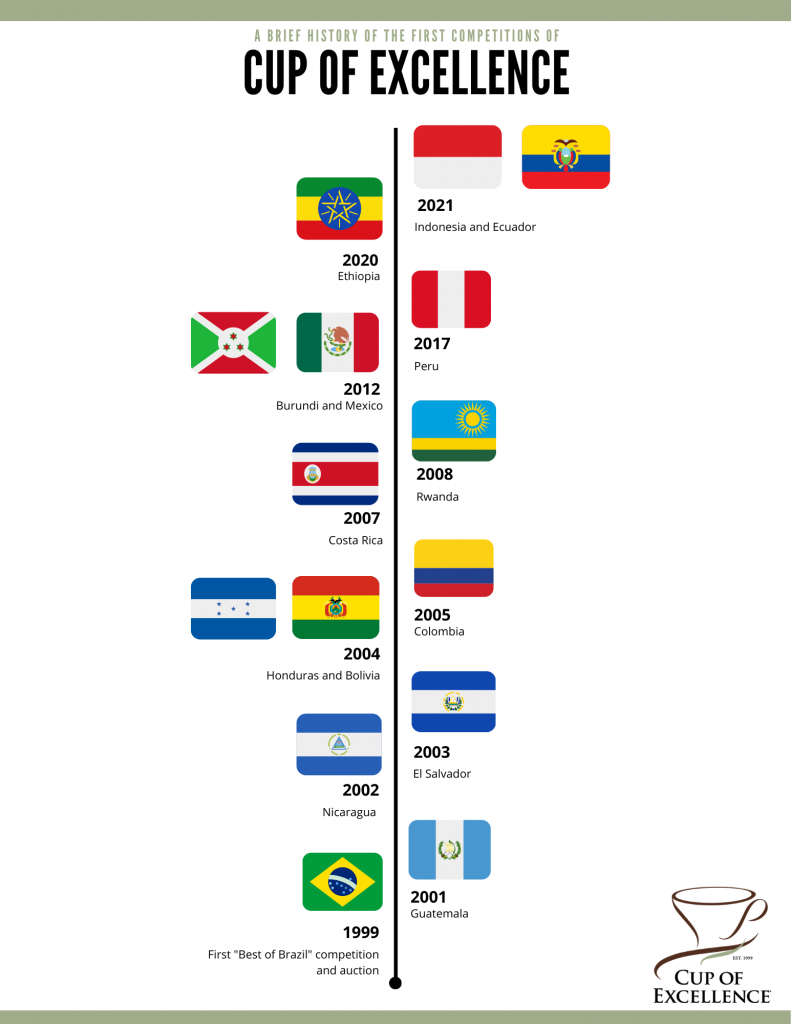 Cup of Excellence program was born in 1999 at the end of a global project designed to help farmers receive more money for their high-quality coffee. The original team that put together the first competition and auction included Marcelo Vieira- Chairman and one of the founders of BSCA, Silvio Leite- quality consultant and still head judge for COE, Susie Spindler- long-time Executive Director of ACE, Hidetaka Hayashi of Hayashi Coffee Company in Japan, George Howell of George Howell Coffee company and Don Holly working with the Specialty Coffee Association of America.

Not only has BSCA been a critical supporter through the years but helped fund the development of the non-profit USA based Alliance for Coffee Excellence in 2002 to manage the growing Cup of Excellence program. Marcelo Vieria took on ACE’s first chairmanship and Susie Spindler agreed to grow the fledgling organization and lead its development. Since then there have been several chairman including Stephen Hurst (Mercanta Coffee Hunters- UK), Becky McKinnon (retired from Timothy’s-Canada) Roberto Bendaña (formerly with Specialty Coffee Association of Nicaragua), Andreas Hertzberg (formerly with Solberg and Hansen-Norway), Kentaro Maruyama (Maruyama Coffee- Japan) and Geoff Watts of Intelligentisa-USA) The present chairman is Will Young of Campos Coffee- Australia/USA)  Susie Spindler managed the growth of ACE and COE until 2014, then returned in 2016. Darrin Daniel took the helm of ACE as it Executive Director in early 2017.

For all its known impact and its international recognition, the development of COE and especially its transparency to the farmers had huge push back and challenges in funding. Critical early support by life time members and higher quality roasters set the foundation for the expansion of Cup of Excellence into multiple coffee producing countries. Presently Eleven (11)  coffee producing nations rely on Cup of Excellence to discover and reward their top coffee farmers and help develop long term marketplace relationships so critical to sustainable economic development. Known affectionately as the “Olympics of Coffee” hundreds of coffee companies around the globe trust Cup of Excellence program to uncover incredible coffees created by worthy and unknown farmers and thousands of farmers have had their lives changed by winning.

More recently ACE moved its headquarters to Portland Oregon and built a fully certified lab to explore sensory training and the on-going development of quality standards.

The Cup of Excellence is a nonprofit, tax-exempt charitable organization (tax identification number 84-3799688) under Section 501(c)(3) of the U.S. Internal Revenue Code. Donations are tax-deductible as allowed by law.